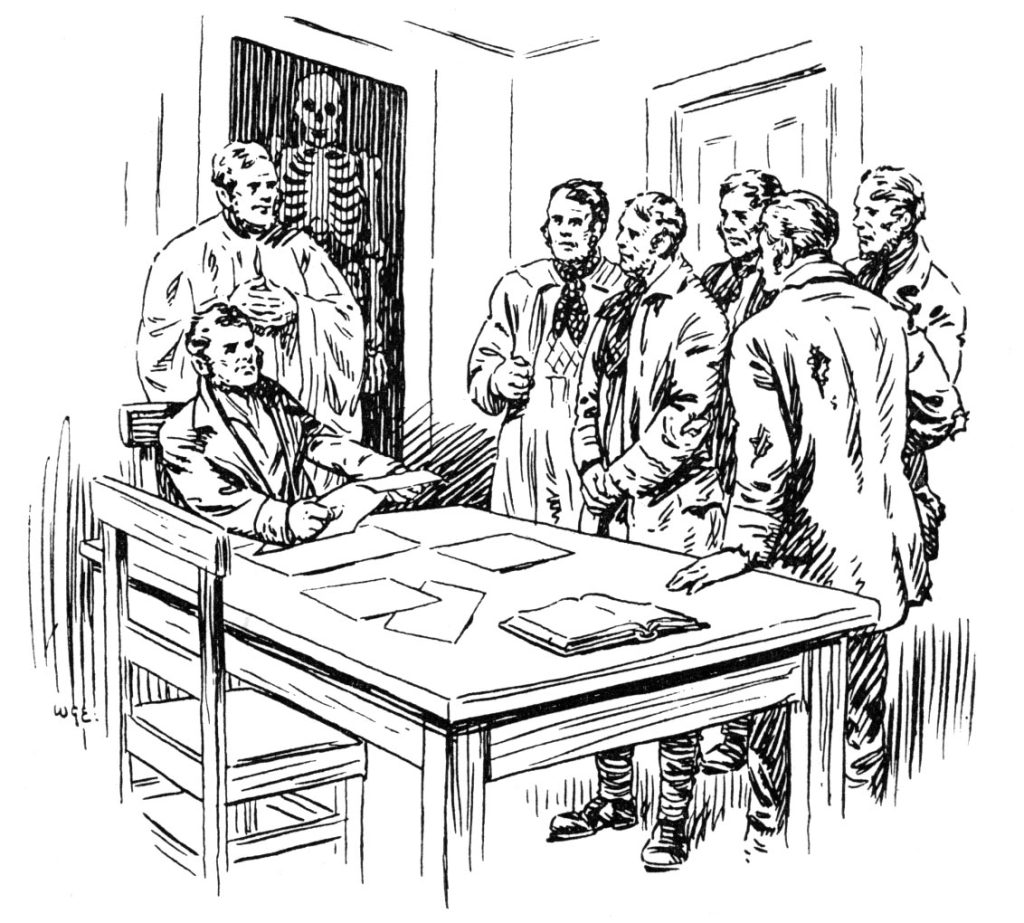 On 15th January 1834, a secret attempt was made to form a trade union of bricklayers in Exeter. Daniel Gill and James Stoddart, delegates of London bricklayers, who were on strike at that time, had been agitating for the union.

The Mayor discovered that “assemblies of a secret kind” were to take place in the Sun Inn. The police hid in the next room spying through a hole in the wall. In his report to the Court, Joseph Cuthbertson, Captain of the Corps of Constables of the City of Exeter, said: “When I came to the door of the club room, I found a man in a fustian jacket at the door. I asked for admittance which he denied me, on which I and those who accompanied me burst open the door. Upon entering the room we found a great number of persons present, I believe about sixty. We found also in the room the articles now exhibited which consisted of a figure of death with the motto, ‘Remember thy latter end’, two wooden axes, two drawn swords, two scabbards, two masks, two white garments, a Bible, a book marked ‘A’ and diverse papers. “When I came into the room, several of the men – I saw three or four – appeared to have been blindfolded and I saw them pulling the handkerchiefs, with which they had been blinded, from their eyes.”

Fifteen men were sent to the Assizes on a charge of ‘combining and confederating themselves together for the purpose of effecting an unlawful object.’ Lord Denman, presiding, found the men guilty but he would not bring them up for sentence unless further complaints were made and they were discharged. This was in contrast to the Tolpuddle Martyrs who, just a few weeks later, were transported for seven years. Lord Denman thought the public were much indebted to the authorities for their promptness which had: “prevented much mischief and had caused great benefit to the public as such associations could only tend to the injury of masters and servants.”

Unions still organised in Exeter despite the court case. Lord Melbourne, the Home Secretary, wrote to the Mayor of Exeter on the 5th April 1834 saying he heard that secret combinations of workers continue to increase. He suggested that if things got worse, the mayor should go to the commanding officer in Plymouth for troops “rather than trust to the Yeomanry”. He wrote again on the 14th April congratulating the Mayor on his actions and saying he has arranged for two troops of Dragoon Guards to be stationed in the town. It wasn’t until March 1862 that the Operative Bricklayers Society was formed in Exeter.