Bridport in Dorset was a centre for rope-making and manufacture of nets. The wide high street and long gardens allowed the ropes to be stretched out and often laid through the houses. The work was labour intensive, much done on piece rates in homes. In February 1912 women employed by Gundry’s in West Street walked out in protest over changes to wages. They marched around Bridport singing Suffragette songs. They rejected a suggestion that the local Conservative MP act as an arbitrator. 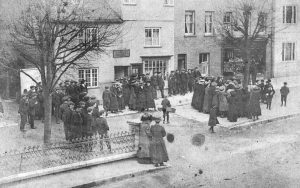 Some seventy women joined the National Federation of Women Workers. They met in the Club Room of the Hope and Anchor Inn. Ada Newton, an official of the union led negotiations and the company agreed to give four weeks’ notice of any change in pay and no such notice would be given until the end of May.

More than £9 had been raised in the strike appeal. The dispute was captured by photographer Clarence Henry Austin. His story along with the Bridport women is told by fellow photographer Carlos Guarita, in his 2015 book: Clarence Austin the Photographer and the bridport Wildcat Women