The Transport and General Workers’ Union was feeling confident in 1938 having recruited more tin miners at the South Crofty mine at Pool, between Redruth and Camborne. TGWU Area Secretary, Mr J Donovan spoke of the progress of the union in Cornish clay, road stone and granite industries. The nearby mine of Geevor was a hundred per cent organised and had better pay. The union was doing well in dock, ship repairing and engineering work. But the management of the South Crofty mine refused to recognise the union and resentment over the poor pay and conditions was growing amongst the workforce. 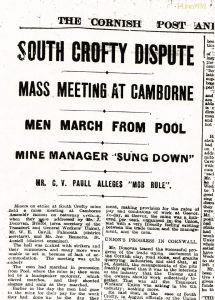 The system of pay was complicated and based on production. Management claimed that the £20 a month that a few workers reached proved that a good miner could earn a good living. But many got around half that amount and it was just bad luck if geology prevented miners from producing a good output.

A dispute was inevitable and at the New Year of 1939 a strike was called. Led by a ‘loudspeaker motorcar’ the workers marched from the mine at Pool to a mass meeting in Camborne Assembly Rooms. Not everyone could squeeze into the packed hall. Union organisers J Donovan, WE Cavil, Falmouth District Secretary and Joe Bennetts from St Austell rallied the men for the fight ahead. A circular was distributed headed “Tyranny of Cornish Employers”. Donovan said: “It is a well known fact that huge fortunes have been made in this industry. Workers in tin mines have been compelled to work under the most abominable conditions.”

Former manger, Josiah Paull tried to speak to the meeting but was “sung down” by the strikers.

The local newspaper, The Cornish Post and Mining New and Redruth Advertiser, claimed that: “During the past ten years Cornwall had been almost free from labour troubles, since the strike at Levant when Ben Tillet came down.”

The management appealed to workers to break the strike, especially those at New Cooks Kitchen mine merged with South Crofty. 30s extra was paid to those willing to work and Chairman Francis Allen won a chorus of “For he’s a jolly good fellow” reported the local paper. Allen claimed that: “Trade unions did not stop at wages and wanted to burrow into other people’s business.” In response to claims of bad management he explained that the manger, CV Paull, “was a good sport or he wouldn’t be captain of the county cricket team.”

Allen felt that Josiah Paull had been refused a hearing at the recent union meeting due to “a few hooligans led, not by Cornishmen but by Welshmen.” He didn’t want Welsh or Irish running the mine. Donovan later responded, saying, “the gibe was cheap”. He said that the 30s bonus for strike breakers was “apt” as thirty pieces of silver.

The TGWU claimed that 85% of the workers were on strike. It paid out £2 a week strike pay which one striker said, “This is the same pay as I got at the mine.”

Jack Jarvis was typical of the strikers. He had followed his father into mining in 1933. A year later, aged 17 years old, he suffered a horrific accident when falling down a stope into a boxhole. A piece of rock stuck into his skull and he injured his legs and lower body. Within six months Jack was back at Crofty. 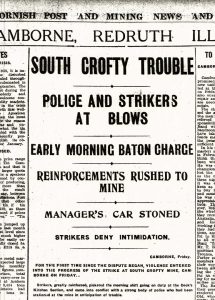 In February the dispute turned violent. Blacklegs were being taken into the mine in management cars. Large numbers of pickets tried to reach the strike breakers as they arrived but were met with a strong body of police who charged with batons drawn. A street fight ensued that left a number seriously injured and lying in the road. Donovan called the police action an “Unprovoked attack on our men”.  He said that a report would be sent to the Home Office complaining about the police.

At the subsequent mass meeting in Redruth the miners pledged to fight to the finish. Camborne and Redruth Council offered to conciliate but management refused to acknowledge the strike!

By March the strike was still strong and the miners marched from Pool to Redruth Ambulance Hall to hear Donovan warn that it would be long strike. Talks in London had failed to resolve the conflict.

On 25th March Florence Hancock, TGWU officer and member of the TUC General Council made one of a number of visits to Cornwall to support the strike. At Camborne Assembly Rooms she explained that the “union was proud of the Crofty miners. The stand of the men was a shining example to some other people in Cornwall.”

By April, the union was paying £500 a week in strike pay to 250 men, the biggest payroll since the start of the dispute.

The Saturday union meetings became a feature of the dispute. Management tried to take advantage of this and secretly arranged a fleet of forty lorries to move tin during the meeting. As soon as the strikers were well on their way to Redruth the lorries began to arrive at the Cook’s Kitchen section of the mine and loaded with bags of black tin. Five lorries got out through the side roadtowards Fourlanes but by then the miners had been alerted. Strikers came rushing to the mine, some armed with iron bars. The lorry drivers wasted no time in leaping from their vehicles and fleeing the scene. A lorry trying to leave the site was attacked and tin was strewn across the road.

The police were quickly on the scene and decided that no more loaded lorries should leave the mine that night. A number of arrests were made and some were later fined.

On Monday police reinforcements arrived including ‘imported’ police to escort the lorries to a Dutch ship moored at Gweek. Union dockers refused to handle the cargo and some went to Plymouth where it was also turned back. The tin, bound for Germany, was retuned to the company’s mine at Castle-an-Dinas.

The Chairman of the company, Francis Allen complained of foul language being used outside the Camborne house where he stayed during his latest visit to the mine. Strikers called him a “fossil” whose personal wealth comes from overseas gold mines.

In August some of the gypsies taken on to break the strike and encamped near the mine applied to join the union. Mr Cavill, the Falmouth TGWU District Secretary said: “although we have been invited to accept gypsies on the roll, we have refrained from accepting them.”

Bigger dispute to deal with

The dispute dragged on against the bigger context of looming conflict with Nazi Germany. In August war was declared. The week after the dispute was settled with the help of Herbert Thomas from Penzance. After 34 weeks of strike, the South Crofty management agreed to recognise the union. The TGWU accepted that it did not aim at compelling the mine to become a 100 per cent union mine. Management agreed “not to victimise any capable and conscientious striker.”