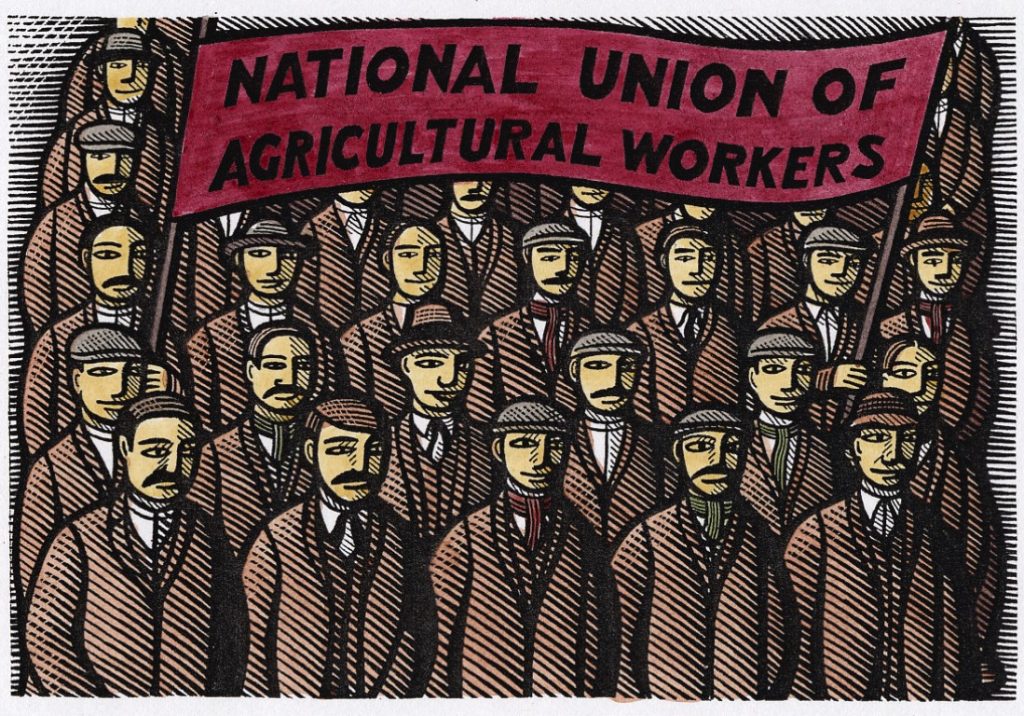 The South West farm labourer was amongst the poorest in the country. George Bartly in his report, The Seven Ages of a Village Pauper (1874) described Dorset, Wiltshire and Somerset as competing to be the worst. The South West generally was a region of “wholesale neglect’. Housing conditions were appalling.

In the 1860s Canon Edward Girdlestone described the typical Dorset cottage: “built of mud, with a thatched roof. Many have only one bedroom. Enter one: a more dreary place it would be difficult to imagine.” He wrote of the wretched rooms full of acrid smoke.

In 1867 Dr Aldridge spoke at a meeting of the Farmers Club in Dorchester where he described the cottages at Fordingham as being so bad “he would not put animals in such places”. Mr Selby, an agent of the Agricultural Labourers’ Union, gave evidence to the Royal Commission on the Housing of the Working Classes in 1884. He spoke of cases in Wiltshire of seven and nine persons sleeping in one small bedroom.

Attempts to organise farm workers were made. In January 1846 a meeting of 1,000 workers was held in Goatacre, Wiltshire. But despite the inspiration of the Tolpuddle Martyrs it wasn’t until the 1870s that agricultural unionism was established.

In 1872 Joseph Arch, a Methodist lay preacher, founded the National Labourers’ Union to improve the lives of farm workers. He travelled the country to build and sustain the union through difficult times for rural communities. Arch was often in the West Country. Farm workers were vulnerable to down-turns in the market for food but also to employer ‘lock-outs’ and West Country farm labourers were the poorest group in society and vulnerable to exploitation and victimisation. But some got organised. Families were often evicted for trade union support. 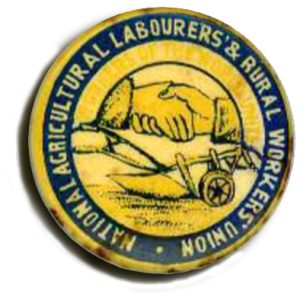 The growth of new unionism generated much debate about how far industrial power could change the lives of people. Joseph Arch knew that farm workers needed political influence too. In 1880 on his way to Salisbury, he was persuaded by the local Liberal Party to stand for Parliament for Wilton, the former county town of Wiltshire. His election campaign included demands for land reform and opposition to Tory landlordism. One topical issue he felt strongly about was to end flogging in the army. The short election campaign saw rowdy public meetings. Employers threatened workers, who had the vote, not to support Arch.

The result was 818 to Sidney Herbert, the Tory and brother of the Earl of Pembroke, and 397 for Arch. It didn’t put Joseph Arch off and in 1885 he was elected as MP for North West Norfolk. The union didn’t fare well and by 1894 it had 1,100 members and accounts of just £2. In 1896 the union was dissolved but it paved the way for a much stronger union.

One from the plough 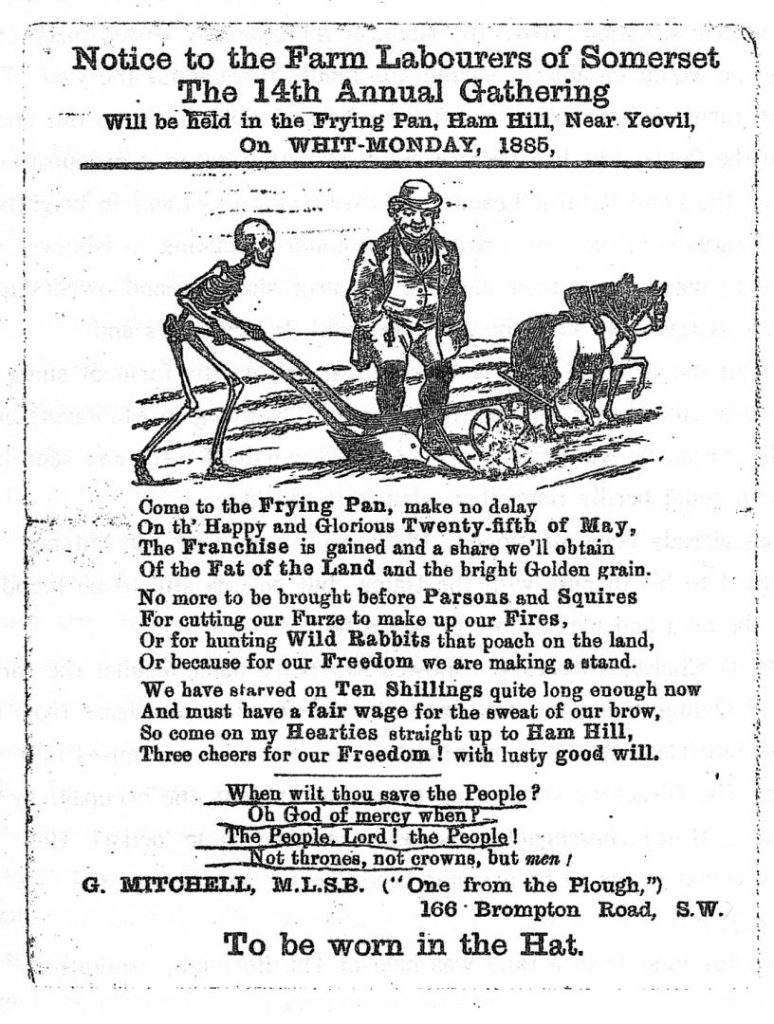 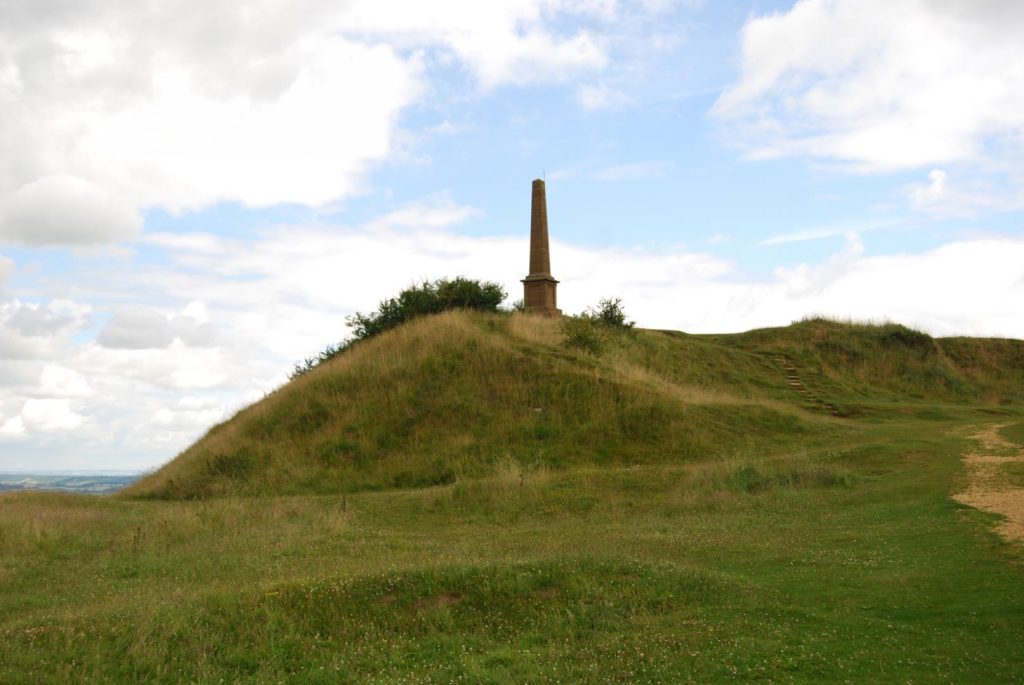 Ham Hill near Yeovil in Somerset

George Mitchell (1826-1901) was born into poverty in Montacute in Somerset. He worked from the age of six and when he was nineteen got a job in the stone quarry. He learnt the trade and became a successful businessman. But he didn’t forget the hardships of the quarry and farm workers that he grew up with. He became known as ‘one from the plough’. Mitchell became a key figure in the development of agricultural trade unionism. He called a meeting of farm workers on 3rd June 1872 in his home village of Montacute. The union branch was formed with 58 new members.

In 1877 George Mitchell organised a mass meeting at Ham Hill, near Yeovil. Farm workers marched accompanied by local brass bands. Some 20,000 people came to hear George Mitchell and Joseph Arch. The event became an annual gathering of farm workers until 1892 when Mitchell spoke for the last time.

Bert Wellstead was a leading figure in building the union in Dorset along with Fred James. Bert was elected to the National Executive and became a local Justice of the Peace. His father, Harry Wellstead was the last Dorset member of Arch’s Union. 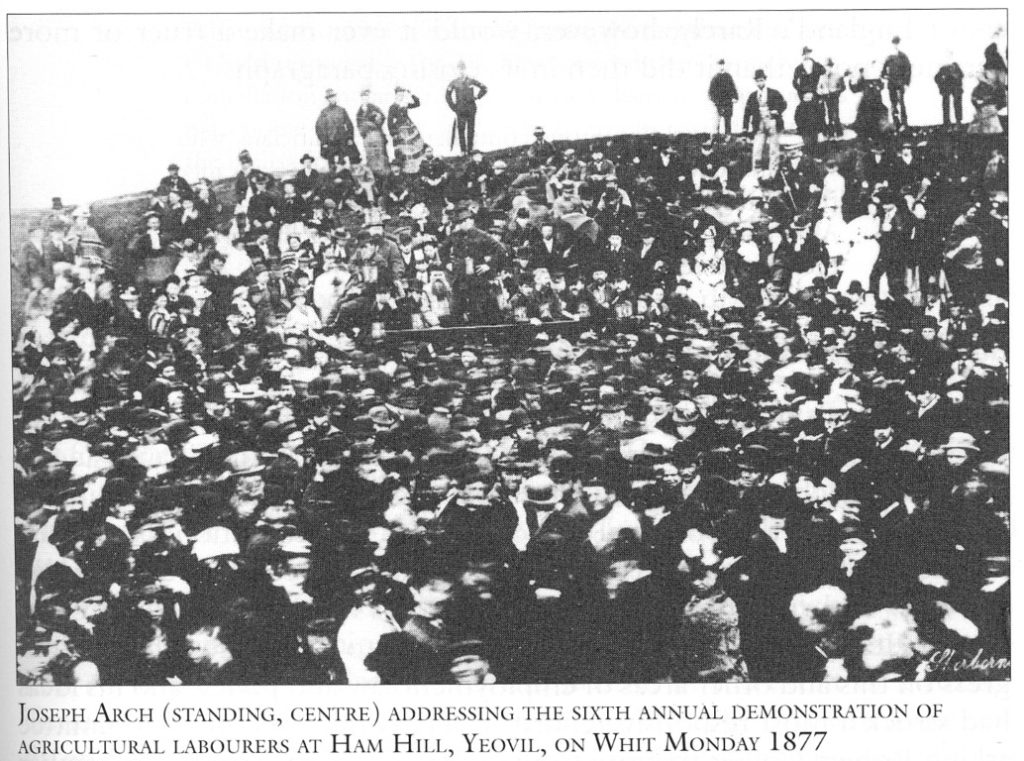 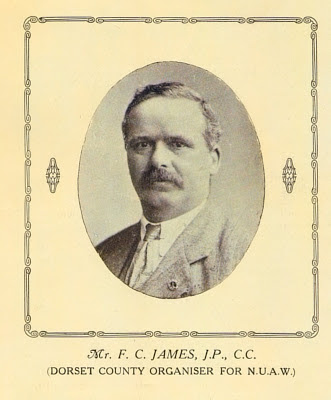 Frederick ‘Fred’ James  was born the son of a Dorchester shepherd, he helped establish the Dorchester branch of the National Labourers and Rural Workers Union in 1917, the first meeting take place at Buglers Café, Dorchester. Soon after the end of the War Fred James was appointed the first Dorset organiser of the union a position he held for 26 years. In 1934, the centenary of the arrest and transportation of the Tolpuddle Martyrs, James became one of the main organisers of the TUC events to commemorate the centenary.
Fred James was an alderman, town and Dorset County Councillor, he was elected Mayor of Dorchester on two occasions. He died in 1946 after which Arthur Jordan became the NAWU Dorset Organiser.

With the bad harvest of 1871, life for farm workers got even harder. By early 1872 families were starving. Miners in the Forest of Dean formed a relief committee and workers realised they needed to get organised. In March a meeting was held in the Feathers Hotel in Staunton. Thomas Strange, a Primitive Methodists school teacher formed the Agricultural Labourers Improvement Society. A local branch was formed chaired by Mr Barnes with John Stafford as Secretary. More meetings were held in Stroud. They called for 15s a week instead of the 10-12s paid in the county.

William Yeates, a mechanic from Stroud helped build the union that merged with Arch’s. He stood down after he mishandled money on a scheme for Brazilian emigration. In 1874 there was a strike in Northleach. James Spencer organised meetings and services in local villages and said that “A true union spirit has taken the hearts of the agricultural classes in all the villages of the Cotswolds Hills.”

3,000 workers met in Cirencester to hear Joseph Arch. Students from the agricultural college, called the ‘blockheads’, tried to disrupt his speech. John Charles Ellicott, Bishop of Gloucester and Bristol hinted that farmers might find the village horsepond invitingly near when union organisers were around. Despite his retractions he was dubbed ‘the horsepond bishop’.