Mr E Watson was a forceful speaker, who drew large crowds for the Bristol Socialist Society. He wrote pamphlets, poems and songs such as Song of the Miners:

Lo! The Worker’s Day is dawning! Cowards pale at Freedom’s warning, Glorious breaks the gladsome morning, And Labour marches on.

Dan Irving worked for the Midland Railway Company as a foreman shunter but lost a leg in a serious accident. A radical Liberal, Irving was won over to socialism and became a prominent activist in the city until he moved to Burnley as the Secretary of the Social Democratic Federation. He was elected MP in 1918, retaining the seat until his death.

Irving became infatuated with Katharine St John Conway, a young teacher at Redland High School. She lived with Irving and his disabled wife. Although Irving was said to be violently in love with Katharine, she insisted there was no ‘impropriety’. She was converted to socialism after working in the poor homes and sweat shops of Bristol. Katharane was elected as the only women on the founding committee to form the Independent Labour Party. She married the fiery Scottish socialist Bruce Glasier. Katharine Glasier became editor of Labour Leader. 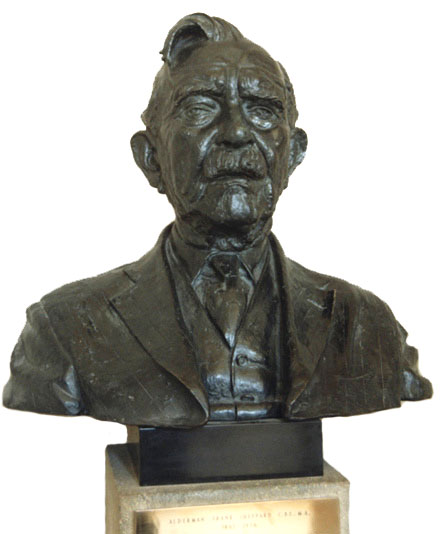 A bronze bust was made by David McFall in honour of his work for the City.

Frank Sheppard was born in Westonsuper-Mare and orphaned at the age of nine. He left school around his tenth birthday and became an apprentice boot and shoe maker at Langford, Somerset. He went to Bristol at the age of fifteen and joined the National Union of Boot and Shoe Operatives. He became an active member and was elected to executive of the union for twenty-two years and became President.

He was a good friend of Ernie Bevin and got involved in Labour politics in Bristol. He lived in Cairns Crescent, Ashley Road and in 1893 he was elected to the City Council for the St. Paul’s Ward. In 1917 Frank Sheppard became Bristol’s first Labour Lord Mayor. He regarded this as a tribute to organized labour in the city. For forty-five years he led the Labour Party in Bristol and for twenty of these headed the City Labour Group. By 1951 he had served fifty years’ service on Bristol City Council. He held countless posts on public bodies, schools, charities and local societies. Sheppard died in 1956 aged 93.

Tom Phillips was a working shoemaker who became one of the finest speakers in the local movement.

JA Cunningham, a bank clerk was one of the earliest Labour members of the Board of Guardians, where he served for twenty years. He was a member of the School Board and Education Committee.

Harry Jarvis, a carpenter, became President of the Trades Council and the Socialist Society, and chaired the Social Democratic Party’s very successful conference in the Shepherds’ Hall, Bristol, 1909.

George Odger (1820-1877) wore the silk hat made for him by the Hatters’ Trade Union during the 1870 by-election campaign in Bristol. Odger was the son of a Cornish miner born at Rouborough in Devon and became a shoemaker. He was one of the ‘junta’ that led unions before the TUC was formed. He represented London Trades Council at the first TUC Congress in 1869 and became one of its first secretaries. He stood in Bristol for the Labour Representation League to promote working class MPs. George Odger came a close second, winning 4,382 votes to the Tory’s 4,686.

The hat is now in the People’s History Museum in Manchester.

Samuel George Hobson (1870-1940) was the only Independent Labour Party candidate in the South West in the 1895 General Election. He stood in Bristol East and got a respectable 1,874 votes, 31 per cent. Born in County Armagh, Hobson had a Quaker education in Saffron Walden and then Sidcot, Somerset. He became a socialist when he moved to Wales, joining the Fabian Society and then becoming a founder member of the Independent Labour Party (ILP). He began writing for the ILP newspaper, Labour Leader, and in 1900 was elected to the Fabian Society’s executive.

During his time in Bristol he was a member of the Bristol Socialist Society. From 1906, Hobson developed a theory of a socialism based on guilds, a form of workers’ self-management. He left the Fabians in 1910 and began writing for the magazine, The New Age. He coined the term ‘guild socialism,’ and in 1914, wrote National Guilds: an Inquiry into the Wage System and a Way Out. He tried unsuccesfully to organise a builders’ guild. Hobson wrote a memoir entitled Pilgrim to the Left – Memoirs of a Modern Revolutionist in 1938.