It was trades councils that saw the need for a national body to bring unions tighter and that called the first Trades Union Congress in 1868. In the 1960s around 60 West Country trades councils were recognised as a local voice of working people. They brought unions tighter at community level and coordinated support for campaigns and industrial action. Through the councils, representatives were elected to serve on a variety of civic bodies and advisory groups.

A Council of Amalgamated Trades was launched in Bristol in 1868 but didn’t survive. On 26th January 1873 a small group of trade unionists met in the Cork and Bottle on Castle Green to set up Bristol Trades Council to aid “the industrial classes in the West of England to organise themselves.” Affiliated societies included those representing rope and twine makers, saddle and harness makers, stone masons and corn porters.

John Cawsey was the first Secretary of Bristol Trades Council but the early years were hard. It relied upon a few craft unions but in the 1880s the Council grew. It was invited to join an investigation by the Bishop into Bristol’s poor.

In 1885 it gave up its political neutrality and established a Local Labour League to put up candidates. The next year Trades Council Secretary Robert Tovey was elected councillor for St Paul’s.

On 6th November 1875 375 building workers met in St George’s Hall and agreed to form Cheltenham Trades Council with George Skey as President. It didn’t last but on 5th July 1894 the inaugural meeting of the Cheltenham and District Trades and Labour Council was held in the Rose and Crown Inn. Charles Fisher, stonemason was President. 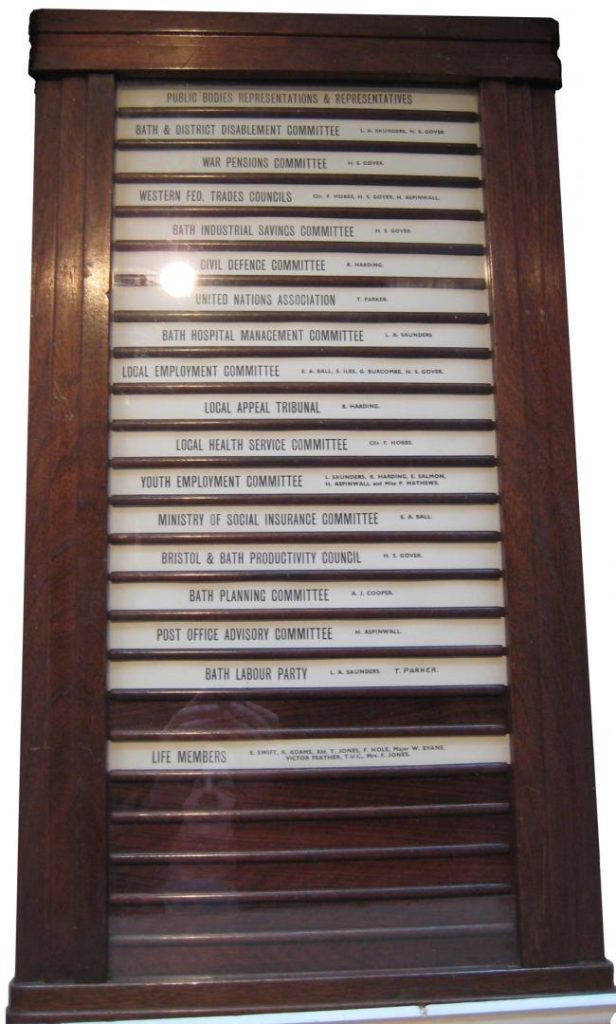 A strike amongst carpenters and joiners in Exeter ran on for many weeks in 1890. It won public sympathy but it exposed the need for inter-union solidarity. The dispute turned nasty when a strike-breaking foreman was jostled by a large crowd on Exe Bridge. Charles Gray was accused of threatening to throw the man into the river and was subsequently fined.

Exeter Chamber of Commerce suggested that a little forbearance by the masters could end the dispute. The unions needed a collective response and on 25th July 1890 the inaugural meeting of Exeter Trades Council was held in the Phoenix Inn, Goldsmith Street (now the Guildhall Shopping Centre).

The carpenters returned to work with a settlement reached through arbitration and the value of the Trades Council was established. Carpenter Bro O Kenshole was elected Secretary and joiner Henry Loram, President. Eight shillings was collected to meet initial costs.

The new council began to press the town council on issues such as public health and education.

1891 saw the birth of Swindon Trades Council. General or ‘new’ unionism was on the rise.  Delegates from twelve branches of ten societies met in The Rifleman to form the Council. A public meeting in the town to launch the Rail Workers Union attracted some 900 people. It wasn’t until the First World War, however, that GWR recognised the union.

Tom Proctor was an activist with the Amalgamated Society of Engineers and the Social Democratic Federation. He worked with the Plymouth leaders of the Gasworkers’ and General Labourers’ Union to form the Trades Council. It quickly set about a variety of local campaigns including a cooperative coal society and a ‘Labour Register’ for the unemployed. Tom Proctor was Chairman and Charles Simmons, Secretary but within two years the council ran into trouble.

The Gasworkers had succeeded in organising mill workers at Buckfastleigh but a demand for higher pay was met by a lock-out. Re-employment was conditional on dropping union membership and the gasworkers’ organisation was almost ruined. The impact was felt in the Trades Council but it was political differences over supporting a Labour candidate that caused its collapse. 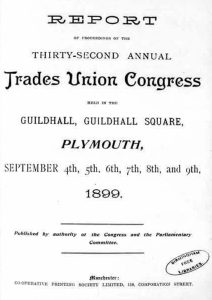 Some unions wanted to maintain their relations with the Liberals – there were 23 Liberal trade unionists in Parliament. Exeter Trades Council learnt from this experience and remained neutral in the 1892 General Election. Albert Dunn, a young lawyer was a radical Liberal active in the town at the time. He presided at a railwaymen’s meeting and declared that: “Although the struggle between classes and the masses has in days gone by given victory to the former, that verdict must and will be reversed in the cause of time.” He was beaten by the Conservative MP but went on to become the MP for Camborne in 1910. 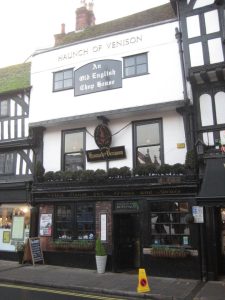 By 1897 a building workers’ strike in Plymouth involved flying pickets going to Torquay and Newton Abbot. There was a need to re-form the Trades Council and on 26th May delegates from the ‘three towns’ of Plymouth met in the Borough Arms with Bro Salter of the Tailors’ Union in the chair and George Canniford, Brushmakers’ Union as Secretary.

The new Trades Council persuaded the TUC to hold its conference in Plymouth and in 1899 Council delegate WJ Vernon of the Lithographic Printers’ Society in Plymouth proudly opened the Congress in the Guildhall.

In 1914 delegates met in the Haunch of Venison pub in Silver Street to start the town’s trades council.