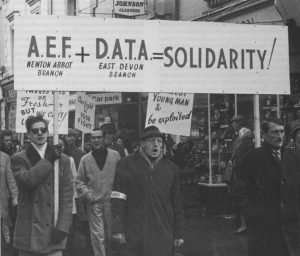 Draughtsmen and Allied Technicians’ Association march in Newton Abbot in 1961

Devon is not known for its militancy yet for about ten years in the 60s and 70s the county witnessed a wave of strikes. 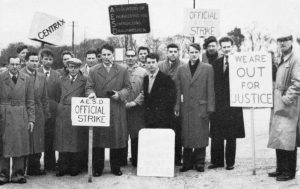 Skilled workers and members of the small Association of Engineering and Shipbuilding Draughtsmen went on strike at Centrax in Newton Abbot, Devon around 1959. In 1969 to 1970 there was a long dispute at Centrax. At times there were violent scenes on the picket-lines but effective ‘blacking’ by unions led to a settlement through the then Department of Employment and Productivity.

In 1964 there was a thirteen-week long strike at Tecalemit organised by the small National Society of Metal Mechanics. The first ever strike at the naval dockyards in Devonport, Plymouth took place in 1968.

During this period another dispute took place at Ottermill Switchgear. The electrical manufacturing business was sited in the old Otter Mill in Ottery St Mary. The strike produced a poem to the boss.

In a fact’ry, in a village,
We were slaving day and night,
Worked so hard for only peanuts
Now you’ll find us out on strike. 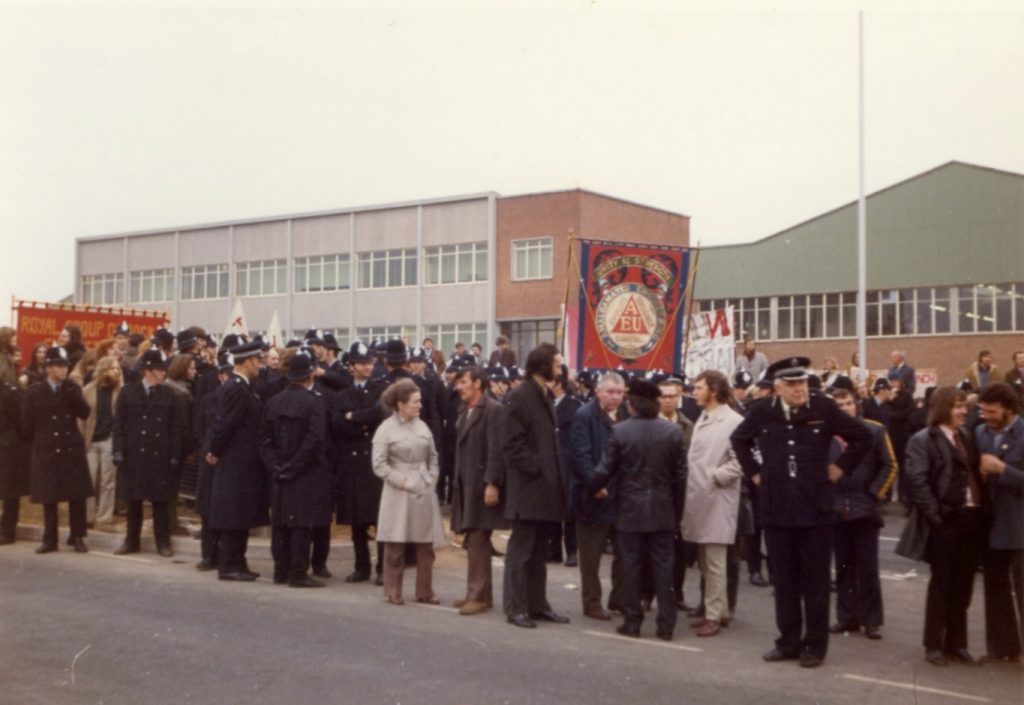 In 1968 James T Barclay, a management consultant, was brought in to run US-owned, Fine Tubes in Plymouth, a specialist engineering firm. Hostile to the unions, he immediately set about antagonising the workforce.

He tried to harass and victimise the senior steward, Dick Williams, by moving him to lower paid work and generally frustrate the unions at every turn. In a row over pay and productivity, the mood of the workforce became more militant and on 15th June 1970, the refusal by Barclay to meet the stewards led to a walk-out that turned into Britain’s longest strike, lasting three years.

169 workers out of 190 went on strike. This was in the middle of the General Election and three days into the strike Ted Health led the new Conservative Government into office promising new employment laws. Picket rotas were organised and company responded by declaring all the strikers dismissed.

A Plymouth promotion for American investment was met with protests demanding fair play and at the Tolpuddle Martyrs’ Rally in July 1970 the strikers joined others from Ottermill Switchgear and Centrax to heckle Vic Feather, TUC General Secretary. This marked the tension between rank-and-file activists and trade union officialdom that ran throughout the dispute – a feature of industrial relations in the 1970s. The strikers sought to win ‘blacking’ action from unions in firms that handled the tubes. Although they gained a lot of moral support, the campaign had limited success.

The strike dragged on through the winter. Spirits were lifted by the election of Herman Welch, Secretary of the Strike Committee, to the Plymouth Council. He stood as the Labour candidate against a Tory who fought a dirty campaign against the ‘militant striker’.

300 people came to picket on 30th July 1971 and the unions tried their best to maintain the momentum of the dispute. In February 1972, the Conservative’s Industrial Relations Act came into force making it illegal to take action against a third-party not involved in the dispute. The ‘blacking’ campaign was outlawed.

After two years the remaining 43 strikers met and agreed to fight on. They were still winning support from around the country. Coventry Rolls Royce workers, British Aircraft workers, South Wales miners, Avonmouth dockers and many others declared their solidarity. A national conference was held in Birmingham but general secretaries stayed away and although the event raised over £1,000, much of the promised support failed to materialise. 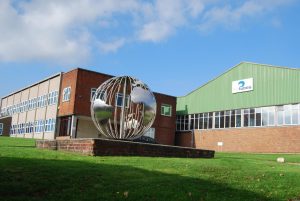 On 19th March 1973 some 700 people from as far away as Scotland rallied outside the Plymouth factory. Afterwards they retired to a mass meeting in the ABC Cinema. But the rally had little impact on Fine Tubes and the last 31 strikers voted to end the dispute on its third anniversary. The longest strike in British history had been beaten and the period of Devon militancy was over.