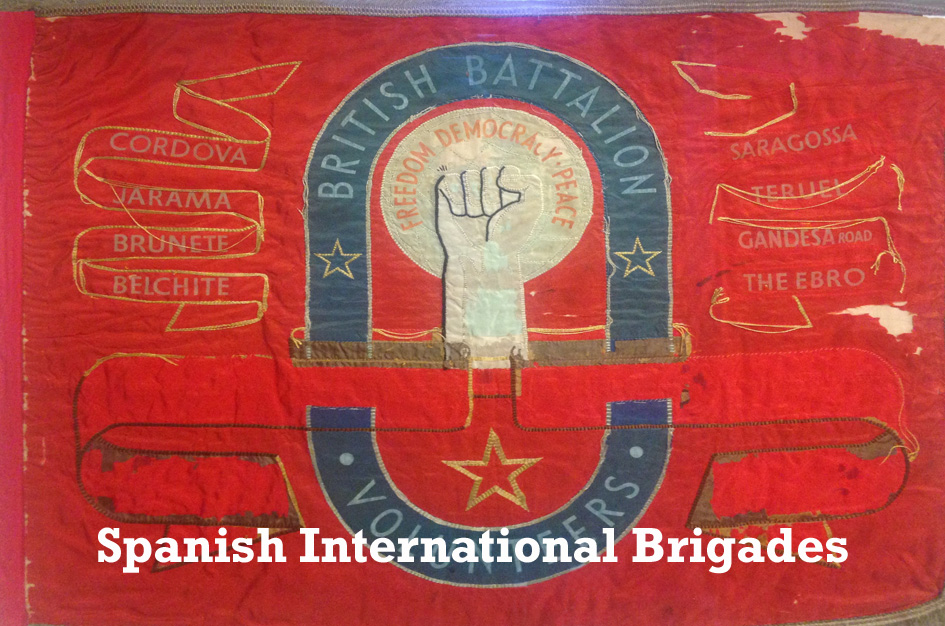 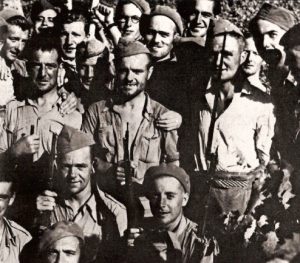 In April 1931 the new Republican Government in Spain began implementing social reforms. They were strongly opposed by the landowners, Catholic church and traditional elements within the army.

In the 1933 elections Spain swung to the right and the new government reversed many of the changes. Parties of the left united in the Popular Front and won the 1936 elections. After violent street battles between left and right in 1936, Nationalist army officers led by General Franco staged a coup to overthrow the Republican Government. They were aided by fascist Italy and Nazi Germany which supplied money, weapons and troops. Britain refused to intervene.

Some 30,000 foreign volunteers, including many from Britain, went to fight in the International Brigades for the Republic. They knew that democracy was under threat and that if the fascists won in Spain then the rest of Europe would be at risk.

The course of the war

The International Brigades successfully defended Madrid in November 1936. But in 1937 Franco’s forces seized Malaga and the Basque region. The town of Guernica was destroyed by bombing. Picasso captured the horror of the war in his painting of the scene. In 1938 Republicans recaptured Teruel but then lost it to the Nationalists after a fierce battle. Nationalists broke through to the sea, cutting the Republican forces in half. The battle at the River Ebro exhausted the Republican forces and in 1939 the Nationalists overwhelmed what was left of them. The International Brigades were sent home.

In the aftermath, tens of thousands of Republican men and women were executed or imprisoned. Many were forced into exile. Franco remained in power until his death in 1975 after which Spain successfully made the transition to a modern European democracy. 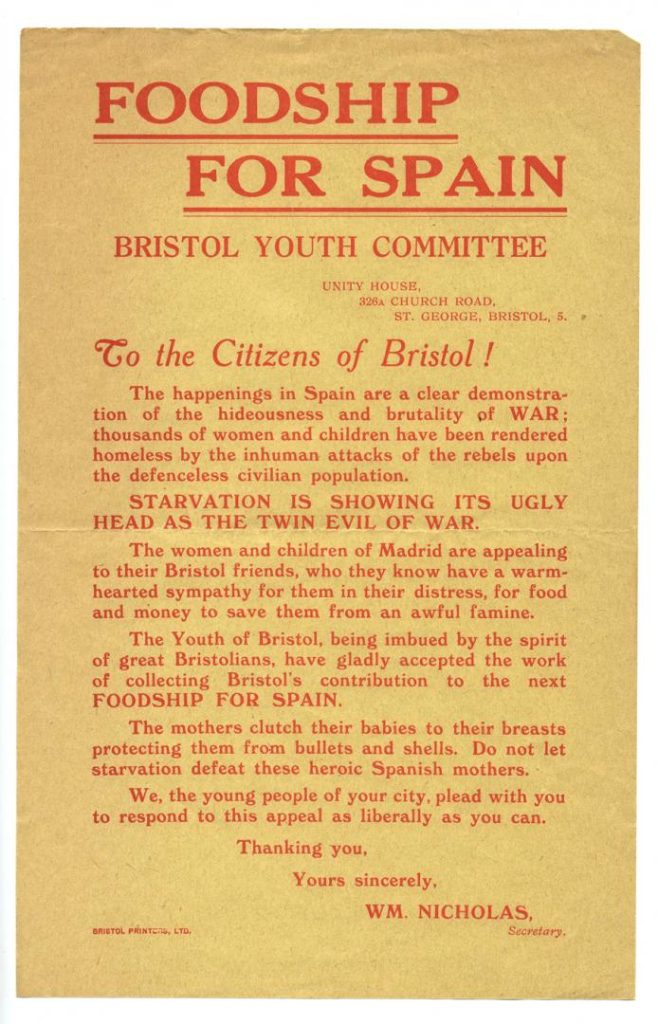 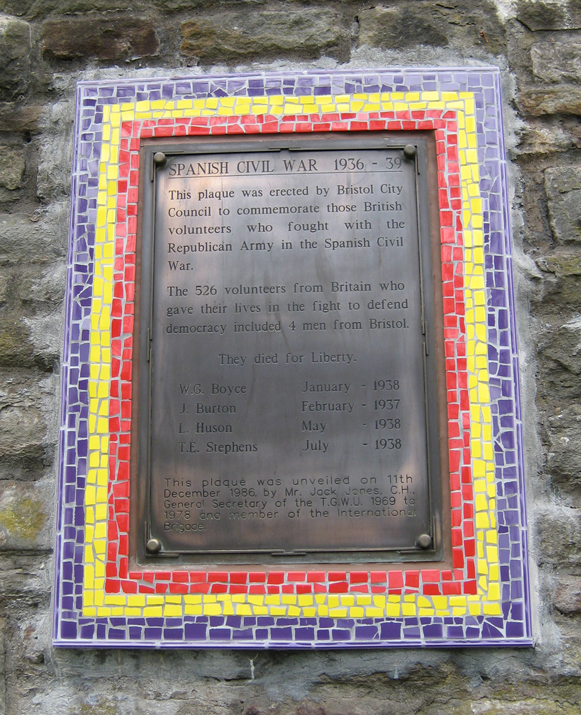 West Country trade unionists who joined the call to Spain and died for the cause are remembered on plaques at the Tolpuddle Martyrs’ Museum and in Castle Park, Bristol. Research was done by Dave Yeomans.

Brigaders with West Country links include Penny Fyvel, who retired to Bournemouth, was a nurse in Spain and wrote a book about her life. Known in Spain by her maiden name of Phelps, she worked in makeshift frontline hospitals in conditions of great hardship and danger. She suffered serious injuries in a bombing raid that put an end to her service in Spain.

The Independent Labour Party sent a contingent to fight in the Civil War. They fought alongside the Workers’ Party of Marxist Unification (POUM). The 25 men included Tom Coles from Bristol and George Orwell, who later wrote about his experience in Homage to Catalonia.

Many more in the West Country, like Bill Nicholas from Bristol – organised collections and rallied support for the republican fighters.

Howard Andrews (known as Andy) was a hospital worker for the Brigades. He helped fight the fascists in the East End of London and recognised the importance of the battle in Spain. He settled in Taunton after the war and continued to fight for peace until he died in 2008 at the age of 101. 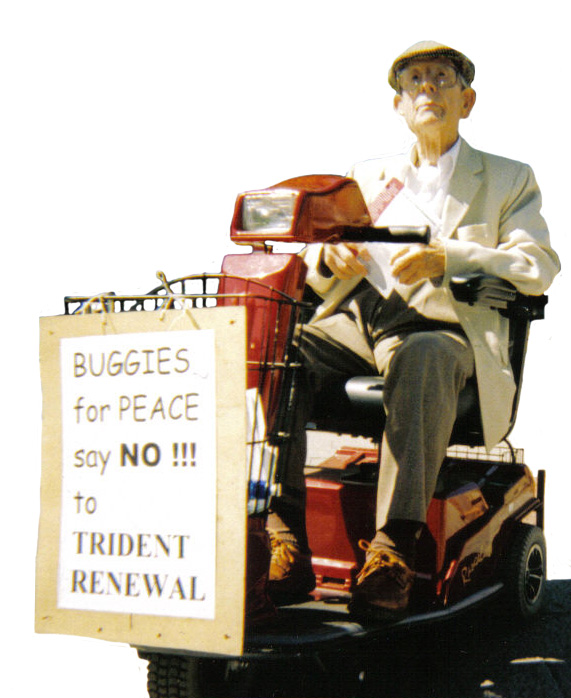 A British veteran of the International Brigades is alive and well and living in the Forest of Dean in Gloucestershire. Geoffrey Servante, a former mechanic in the merchant navy, enlisted with the International Brigades in June 1937, a few weeks after his 18th birthday. He was assigned to the Anglo-American 14th Battery of the 2nd Group of Heavy Artillery, based in Almansa, between Albacete and Alicante. The official records say he was a good and disciplined comrade, who returned to Britain early in 1939. 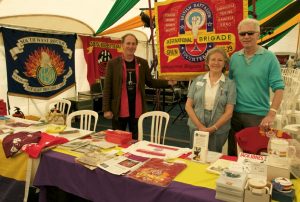