George Loveless was the first to arrive home, on June 13, 1837. He was greeted by members of the London Dorchester Committee. There was no fanfare: the King was dying. George slipped back into obscurity in Tolpuddle.

Here he wrote ‘The Victims of Whiggery’. A powerful polemic, it was much quoted at meetings of Chartists who were beginning to gather strength against bad employment practices. The pamphlet’s price was four pence; profits were devoted to the Martyrs’ families, supplementing support from the London Dorchester Committee during the years of separation.

James Loveless, James Brine, Thomas and John Standfield set sail on the ship John Barry on 11 September 1837. They were delayed some nine weeks in New Zealand as the ship took in timber, which they helped load on board. On Saturday 17 March, exactly four years from the date of their trial, the ship cast its anchor in Plymouth Sound. People flocked to greet them from the quay and they were welcomed in the Dolphin Inn before moving to the home of James Keast, a prominent local trade unionist. The Committee of Trades organised a Public Welcome on Thursday 22 March in the Mechanics Institute, Princes Square, Plymouth.

On 23 March the four men took the coach to Exeter where a further public meeting was held. They arrived in Dorchester to stay at the Antelope Inn on 26 March with new suits of clothes. After a few days’ rest they travelled to London in time for a grand dinner on Easter Monday 16 April in White Conduit House with some 2,000 people.

James Hammett was the last to reurn home, arriving at the New House Farm in August 1839. He was given a public welcome on 22 September at the Victoria Theatre – now known as the Old Vic. Alone among the Martyrs, James Hammett did not write of his experiences. He was the only one with a criminal record before the arrest and he fell foul of the law in New South Wales.

He stayed behind in Tolpuddle, forsaking farm work to become a builder’s labourer. Details of his life only emerged in 1875 when he was honoured as one of the earliest agricultural trade unionists, at a time when Joseph Arch, leader of the Agricultural Labourers’ Union, wished to consolidate resurgence of union activity. 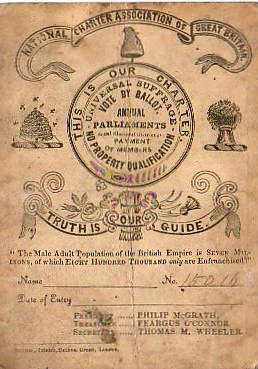 The Essex squirearchy reacted much as Squire Frampton had. The Vicar of Greensted preached against their chartist activities: the foundations of decent society were being undermined; paternal, beneficial order where everyone knew his proper place must be restored. He alerted the Home Office.

According to the Essex Standard: “George Loveless, instead of quietly fulfilling the duties of his station&ellip; is still dabbling in the dirty waters of radicalism and publishing pamphlets to keep up the old game.”

Continuing pressure from landowners forced the other five to seek new lives in Canada, where they settled as farmers in London, Ontario. Canada.

Mounting protest
Return to start
Meet the martyrs
We use cookies on our website to give you the most relevant experience by remembering your preferences and repeat visits. By clicking “Accept All”, you consent to the use of ALL the cookies. However, you may visit "Cookie Settings" to provide a controlled consent.
Read moreCookie settingsAccept all
Manage consent