The secret oath to join the union 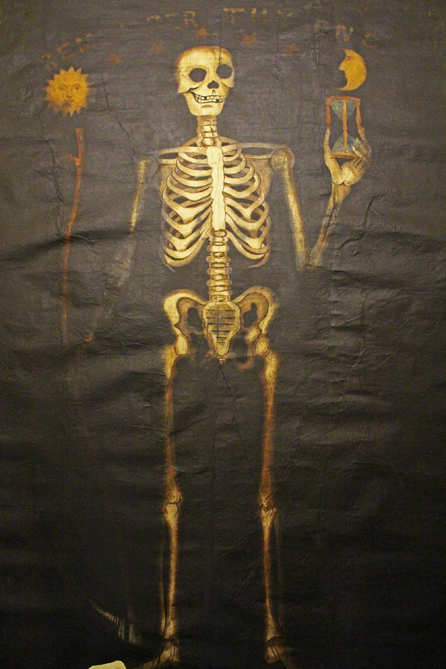 George Loveless and the union leaders needed to gather support from farm workers before they could confront the employers. To build the union they needed to win members and collect the pennies in subscriptions so they had more strength in numbers. To bind workers together in this common approach they used an oath of solidarity.

New members were asked to pledge their support to the society and their fellow workers with their hand on a bible and looking at a picture of a skeleton.

The oath was taken in the upstairs room of Thomas Standfield’s cottage in Tolpuddle.

Squire Frampton had been busily gathering evidence against the Tolpuddle men. There was already evidence from one of their fellow labourers, Edward Legg, who had betrayed them at a preliminary magistrate’s inquiry.

Now Frampton wished Lord Melbourne to know that societies were being organised among the agricultural labourers, inducing them to enter into combinations of a dangerous and alarming kind to which they are bound by oaths administered clandestinely.

Melbourne advised caution. But once Frampton had proof of unlawful combination his lordship advised him to study section 25 of 57 Geo. III, c. 19, the Act of Parliament whose purpose was to more effectually prevent Seditious Meetings and Assemblies.

The Grand Jury’s foreman was William Ponsonby MP, brother-in-law to the Home Secretary Lord Melbourne. Members of the jury included James Frampton, his son Henry, his step-brother Charles Wollaston and several of the magistrates who had signed the arrest warrant.

The trial was presided over by Judge Baron Williams whose closed mind was evident even before it properly began.

“The object of all legal punishment is not altogether with the view of operating on the offenders themselves, it is also for the sake of offering an example and a warning,” he declared.

The landowner magistrates found a way of trapping and punishing the Martyrs, using two laws in combination.

The men were tried at Dorchester Assizes in March 1834, found guilty of administering an unlawful oath, and sentenced to seven years’ transportation to Australia. The harshness and injustice of their treatment caused massive public outcry.

For more on the court and how to visit click here.

Swing rebellion
Return to start
Transport
We use cookies on our website to give you the most relevant experience by remembering your preferences and repeat visits. By clicking “Accept All”, you consent to the use of ALL the cookies. However, you may visit "Cookie Settings" to provide a controlled consent.
Read moreCookie settingsAccept all
Manage consent