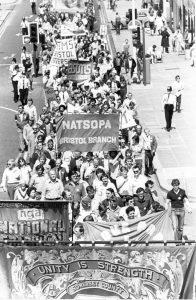 In 1979 Margaret Thatcher led the new Conservative Government in a brutal assault on trade union power. The economy took a steep dive with unemployment rising to more than three million. A well-prepared, step-by-step, process of tightening laws restricted union actions and encouraged employers to challenge unions.

The dispute between Eddy Shah’s Messenger Newspapers based in Stockport and the National Graphical Association was the first real test of the hostile laws. The unions was heavy fined, sequestrated and bypassed by non-union labour using new technology. The police responded to the union’s mass picket with a show of force not seen in an industrial dispute.

Within weeks of the union’s defeat the Government announce the ban on unions inside GCHQ, based in Cheltenham. A few months after that the year-long miners’ strike began. Few believed the timings were a coincidence and believed that unions were forced to defend their very existence. South West trade unionists gave support to the various strikes. Food parcels were organised for mining communities and people joined demonstrations of support where they could. The defeat of the printers and the miners was just one actor amongst many that led to a period of decline in trade union membership and influence. 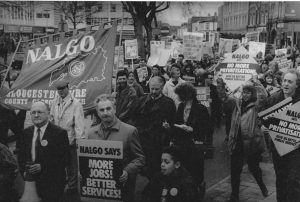 The global economy was changing and the threat of unemployment and foreign competition reduced the power of workers. Technology and the structure of industry was changing with the closure and fragmentation of large workplaces. Privatisation broke up public services and nationalised industries where unions were strong. The Government encouraged an enterprise culture that championed individualism and private profit. Human resource managers took over personnel departments often with a determination to keep out or bypass unions. Given the range of factors bearing down on unions, they proved remarkably resilient. 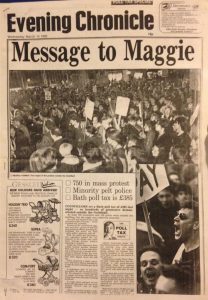 Alongside the assault on trade unions was the attack on public services. The hardist hit were the poor and disadvantaged communities. Riots broke out in a few cities inlcuding in St Paul’s in Bristol. The hated Poll Tax brough a wave of protests and refusals to pay it. 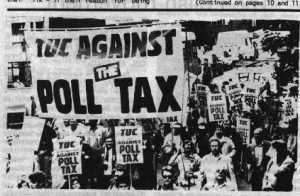