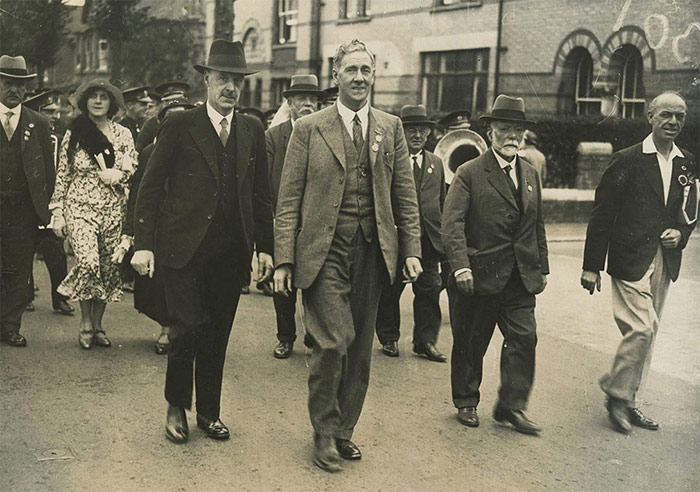 Welcome to the History pages, which chart the events at the Festival since it began. To begin your wander down memory lane, select a year from the list on the right.

Tolpuddle has been a place of great importance to the Labour Movement from the moment news broke of the harsh sentences imposed on the six farm workers who led the formation of the union.

One of the earliest organised commemorations was in 1875 when the Agricultural Workers Union presented an engraved watch and illuminated address to James Hammett, the only one of the six Martyrs to return to Tolpuddle.

April 1908 a meeting of theTolpuddle Martyrs’ Memorial Scheme Committee agreed to launch an appeal for a pamphlet to tell the story with the aim of erecting some sort of memorial in the village. In 1912 a memorial arch was unveiled outside the Methodist Chapel in Tolpuddle by Arthur Henderson, the Labour Leader.

In 1922 the Working Women’s Club Fete and the National Union of Agricultural Workers held a joint festival. In 1925 a party of ASLEF railway workers stopped in Tolpuddle to pay silent tribute at the arch. Other individuals visited the village including Prime Minister Ramsay MacDonald on his way back from Cornwall in 1933.

In 1934, Lloyd George, leader of the Liberals, came to lay a wreath and praise the role of trade unions.

In 1934, the centenary year of the arrest, the TUC celebrated in style. Unions paid a farthing a member for two years to establish the Tolpuddle Martyrs’ Memorial Trust – a charity to pay for the commemorations and retirement cottages.

Six cottages were built to house the ‘aged and poor’. Electricity was brought to the village and a new well dug. A massive crowd came to witness the opening of the cottages. A play was performed, a medal struck, a headstone designed by sculpture Eric Gill unveiled and a thatched shelter was erected next to the Tolpuddle Martyrs’ Tree.

A lavish gala festival was held involving a range of activities such as sporting, writing and brass band competitions. A grand procession and pageant were held in nearby Dorchester. After the war the annual Tolpuddle Martyrs’ Rally reflected trade union confidence but in the 1950s some Labour leaders stayed away because of the involvement of Communist Party members.