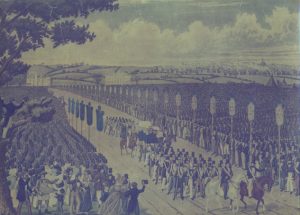 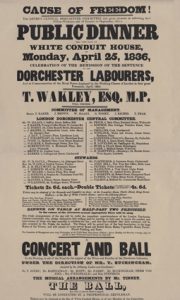 Five of the Martyrs landed in Plymouth and on 16th April they were the star guests at a Grand Dinner at White Conduit House, London.

Some 6,000 workers met near Blandford to demand the People’s Charter for voting reform. Landowners on horses tried to scare them off.

James Hammett returned to join the others on stage at the Victoria Theatre (now the Old Vic), London.

All but James Hammett emigrated to Canada.

Presentation was made to James Hammett in a marquee in Briantspuddle led by farm union leaders George Howell, Howard Evans and Mr Cox.