First rally since before the war heard from Sidney Dye MP for Norfolk. Whitechurch Silver Band led the march.

Festival began on the Thursday with Old Time Dane in Dorchester Corn Exchange. Friday saw a Variety Concert and Saturday a 200-strong march in Dorchester led by London Workers’ Pipe Band. Events included gymnastics, horticultural show and sports. On Sunday Edwin Gooch MP and Alfred Dann spoke of the massive growth in the NUAW. 70,000 workers had joined that year, 500 in Dorset in the previous six months. 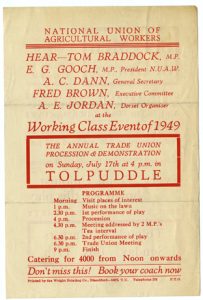 The press reported “disturbances with communists”. The Six Men of Dorset play was performed in London.

A play, Match Girls, was performed by Unity Theatre. Press reported attendance at 2,000.

Unity Theatre staged a play about the peasants’ revolt called The Word of a King. Tom Driberg MP for Malden and Fred Brow for the NUAW spoke to only 200 people.

Labour leaders boycotted the event rather than share a platform with communists. Around 400 heard Edwin Gooch and Alfred Dann. Wyke Regis Band played.

Sir Hartley Shawcross MP argued against nationalisation of the land, calling instead for a tax on land values. Harold Collinson, the new NUAW General Secretary, spoke.